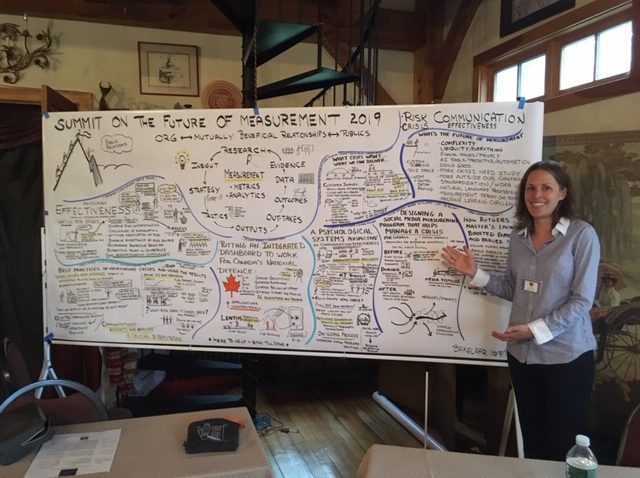 Do you realize that immigration, the environment, gender equality, and racial profiling are social issues that could wreck your organization whether you like it or not?

Just recently I had the privilege of speaking with communications and public relations professionals from around the world who have learned this the hard way without really being prepared.

No matter how you relate to these issues today, you must be prepared to take a stand—even if they seem far removed from your reality.

In a political and social world in constant turmoil and in a media universe always on the lookout for the next crisis, communications and public relations professionals can no longer ignore any issues, including those that don’t concern them at first glance.

IN A CRISIS SITUATION, YOU CAN NO LONGER IGNORE MEASUREMENT AND EVALUATION, BECAUSE EVERYTHING HAPPENS SO FAST!

This was one of the lessons agreed upon at the Summit on the Future of Communication Measurement held in New Hampshire, which addressed, among other things, measuring communications in times of crisis. I was the only Quebecer taking part in this summit organized by American public relations measurement specialist Katie Paine, aka the “Queen of Metrics”. Mesure Média has been participating in this “International Task Force” on evaluation for several years.

Set amid New England’s spectacular fall foliage, the event brought together a few dozen communications and public relations professionals, with discussions focusing mainly on the theme of reputation in this age of risk.

When the U.S. coughs…

Today, our neighbors to the south live in a world that seems more troubled than ours: an impeached president, tweets at all hours of the day and night, and political-media scandals involving foreign powers such as Russia, with nothing to calm the country’s climate.

You are no doubt familiar with the saying “When the U.S. coughs, Canada gets the flu,” meaning that U.S. social, economic, and political phenomena often have a considerable impact here at home.

It has become clear that we, as communicators, are no longer immune to global issues that extend far beyond the borders of our southern neighbors.

Measuring the impact of immigration on Southwest Airlines

An excellent example of this new reality came from Southwest Airlines. Cindy Villafranca and Rachel Forrest, two communications measurement specialists for Southwest Airlines, showed us that even if an issue seems to be outside your company or industry, you can no longer ignore it.

If you had told them a year ago that they would have to deal with a crisis involving U.S. immigration policies, they wouldn’t have believed it. And yet…

In summer 2018, Southwest Airlines had to take a stand on President Donald Trump’s policy on migrants, where children were to be separated from their parents.

On Twitter, which Southwest Airlines continuously monitors and measures, many Americans condemned airlines that transported children without their families.

DURING THE CRISIS, ACCURATE DATA WAS MEASURED IN REAL TIME AND DECISIONS WERE MADE.

Southwest Airlines, which had never had to take a stand on immigration policies, was the target of serious criticism and questions from Internet users such as “What are you doing to fight this injustice?”

In the face of this major crisis, Southwest Airlines—a direct target—acted quickly to secure its reputation. It dove right in. It notified the federal authorities that it no longer wanted to transport children separated from their migrant parents. As a result, the crisis turned into positive coverage in traditional and social media, which conveyed the firm stance of Southwest Airlines and other airlines that followed suit.

Communicators are sometimes reluctant to measure issues that are critical to their organization. But in an increasingly mediatized world that is continually searching for the next controversy, data allows communicators to better navigate the murky waters.